The Pere Marquette Chapter will be holding the 27th annual Turkey Hunters Rendezvous and State Calling Championships On Saturday, March 29, 2008 at the high school at Baldwin. The doors open at 8:00AM

Our organization will be conducting a fall turkey hunting seminar at Jay’s Sporting Goods in Clare on Saturday September 29, 2007. It will begin at 10:00 AM and end at 12:00 noon. Cost of the program is free. There will be a gun and item raffle, and a chance to win... 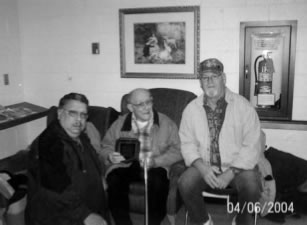 Chapter founder and long time president, Robby Robbins was recently honored by our chapter. A plaque and a blanket were given to him, honoring him for his many years of dedication both to our Wild Turkeys and to our chapter. The blanket was handmade by Mary May. Sewed on were the series of MWTHA patches.
Page 12 of 12« First«...89101112