Of Hares and Turkeys

The October 9, 2014 issue of Michigan Outdoor News reported on a study conducted by Michigan State University on the disappearing Snowshoe Hare population throughout northern Michigan. The Study costing $118,709 was commissioned by our Michigan DNR using Pittman-Robertson funds. They looked at 134 sites statewide and found that 49 percent of the historic lower peninsula sites and 27 percent of the upper Peninsula sites do not have hares anymore.

For many years I can be found in the woods before first light during April and May. I just love to witness the sight and sounds as darkness fades to first light. Each morning I walk at least one half to one mile. By the end of May, for an old guy, I am in pretty good shape.

A very sincere THANK YOU to our members who once again were responsible for another very successful Wild Turkey Hunters Rendezvous this past March. It take a cooperative effort by all involved. Another THANK YOU for those of you who attended and contributed to our organization.

Winter is Time for Sound Science

This past winter (2013-2014) was one of the most severe in many years. Temperatures remained below freezing for several months, with deep snow depth and high winds. It was truly a very brutal winter especially on those species of wildlife that did not migrate or hibernate.

Several MWTHA chapters were purchasing and distributing shelled corn to thousands of Wild Turkeys. We did our best to get the word out that there was support available for turkey flocks, realizing at the same time that any turkeys that could not find a food source would not survive. 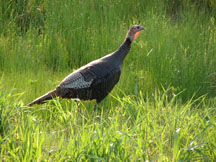 Of Public Forests and Turkeys XII

This past December our organization was represented at the state forest compartment reviews within four counties in the DNR Cadillac district. Once again, we were the only ones other than DNR personnel present. Where were the “save the habitat – save the hunt people?”