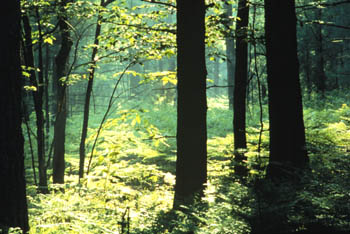 The wilderness of the Pigeon allows it to be the only state forest where a huntable population of elk is found. It is a place of elk deer, wild turkeys, grouse, woodcock, squirrels, snowshoe hare, bear, Barred Owls, coyotes, fox and a host of other wildlife species. That these will remain within the Pigeon is directly dependent on actively managing the habitat requirements of each species. As a side note, just a few years ago the Pigeon held more Wild Turkeys than the other millions of acres of our state forests.

An article appeared in the March 2006 issue of Michigan Turkey Tracks, entitled Paradise Lost that addressed the many problems confronting the Pigeon. A copy was sent to DNR Director Rebecca Humpries with a follow-up letter. A letter was also sent to Bob Jacobson, MWTHA member and president of the Michigan Conservation Foundation.

One of the major problems was with the horse riders who literally had taken over the Pigeon. In the early 1980’s the forest manager was seeking a Directors Order because the horse people refused to stay on the trails. No order was issued despite the fact that the problem was being compounded each year. The DNR fisheries biologist complained that the horses were trampling the banks of the trout streams causing severe erosion of sand. A Directors Order was sought, none came.

To her credit, Director Humphries held several meetings within the department, NRC with Bob Jacobson attending. She appointed a committee to study the problems confronting the Pigeon and come up with recommendations to update the Concept of Management. We asked to be appointed but were denied, however, Bob Jacobson was appointed.

Eventually, a somewhat flawed plan was developed and approved by the director. The plan restricted horseback use to county roads and forest roads identified as open. All other trails will be closed to horses unless otherwise approved by the Director. Off road or off trail horseback use shall be prohibited. This information was included in a March 2008 article in Michigan Turkey Tracks.

The draft plan was completed prior to the November 2007 meeting of the Natural Resources Commission (NRC). Numerous horse people appeared at the meeting to explain their god given right to pillage the Pigeon. Regardless, a Director’s Order was issued. Both we and the Michigan Conservation Foundation testified in support of the order. Every other so-called conservation organization was silent.

The Pigeon River Country State Forest is the only state forest that has a Concept of Management and an advisory council. The July 25, 2008, meeting of the council was attended by 15 or so horse people. They had in tow state representatives Sheltron, Casperson and Elsenheimer and representatives from the offices of state senator Stamas and congressman Camp. After a great deal of rhetoric, the person representing the horse people on the council made a motion to have the council send the horse use issue back to the Horse Use Committee. Credit is due to some of the members on the council as the motion failed on a 10 to 6 vote. Apparently, there were 6 people on the council willing to compromise this very special and unique forest. Since that time several members who adamantly defended the BIG WILD have been replaced. The above information appeared in an updated article in the September 2008 issue of Turkey Tracks.

After being rejected by the DNR, NRC, and advisory committee they approached state representatives Frank Foster and Greg McMaster who introduced House Bill 4884 that would allow horse riders access to all state forest lands without restrictions. As it worked its way through the legislature it hit a big snag. The Pigeon was partially purchased with Pittman-Robertson fund which is a federal excise tax on hunting equipment and ammunition. Both representatives received a four-page letter from the U.S. Fish and Wildlife Service dated 12/23/2011 advising that if the bill was to pass that it violates the provisions of Pittman-Robertson and Michigan would forfeit about $25,000,000 in annual funding. The bill died. There has been an Equestrian (horse) advisory committee established.

Another issue arises. Michigan Governor Rick Snyder, in 2011, brought the DNR Parks and Recreation Division into the Pigeon River Country for the first time in its history. All management of campground rentals, pathways, and water access sites has been taken from foresters to the recreation specialists as administrators of a forest recreation program. A Parks Division supervisor stated the “We’d also like to develop a recreation management plan for the Pigeon in general.” The Pigeon does not need a recreation plan. The governor’s action is the first step into turning the BIG WILD into a state park. How pathetic!

In this ever increasing time of exploitation of our natural resources we owe it to future generations yet unborn to ensure that there are places for them such as the BIG WILD. Unfortunately, apathy, ignorance and self-interest (AISI) will always be present.

Fall 2015 Update
Turkey Tails: Did You Ever - How Hunting Evolved - So Long!